Addendum: Fantastic news that as of 2017 the DPR range is back in production thanks to purchase of the DPR manufacturing business (presumably from Flying Toys Ltd.) by an aeromodelling entrepreneur and are now being distributed by Jarvis Manufacturing and J Perkins.

It has been a while since my last post. I’ve had a number of other priorities and I’m soon going to be moving from Edinburgh to London. Exciting times ahead. So onto the subject of today’s post. I’ve already made my views clear on the subject of ‘to build or not to build’ old unbuilt kits within my earlier posts, those who prefer to hoard such kits are advised to turn away now!

DPR models used to be everywhere in the 1990’s and their range started with basic sheet balsa ‘Chuckie’ gliders through to advanced balsa and tissue kits at the other. DPR models sold over a million kits which for a niche hobby was astonishing. I would compare DPR at the time more to the likes of the Guillow’s. By that I mean you could find them in most toy shops and not restricted solely to specialised model shops as per Kiel Kraft or Veron. 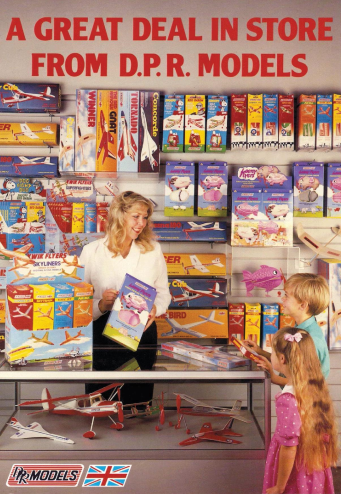 Hamleys aside, most toy stores didn’t offer such a glorious sight – a squeaky turnstile was the more typical offering. However the key to DPR’s success was they were available in a humble toy store and therefore much more accessible to all.

While Guillow’s have thrived and can continue to be seen almost everywhere online, in museum gift shops and even some larger toy stores, the traditional offerings of DPR models fell short of the more demanding consumer market of the 2000’s that preferred instant gratification. Not all was bad news though as the founders of DPR models, David (Peter) and Janine Rawlins, recognised the change in market and in 2003 the couple re-registered their company as Flying Toys Ltd. Today, based in Essex, they are the distributing company behind the high successful Parrot series of RC toys.   I must say that I do like this current range of RC toys. With so many being sold, combined with so many YouTube clips of ‘hobby-grade’ RC aircraft in action online, the chances of the bug biting and someone moving from toys to more advanced models – whether that be one of the aforementioned Guillow’s warbirds or a full house RC aeroplane/helicopter are greater than ever. This can only ever benefit the hobby.

The flagship models within DPR’s range were the ‘Hyper Cub’ light aircraft and the ‘Rare Bird’ glider. Both were traditionally constructed stick-n-tissue free flight offerings, the former powered by a neat little rubber powered gearbox. Both of the models featured here were built from original kits, and apart from a lack of free time (I started these in December last year!), were straight forward to put together. Unlike the picture on the boxes, which display the models finished in a smart and colourful livery; I opted to leave mine as bare doped tissue. They do say beauty is in the eye of the beholder!

The rare bird is light and strong – particularly the front fuselage which benefits from a plywood keel/tow hook former.

The decals were in a poor way and needed resealing with Klear before they could be gently coaxed onto the wing. The same could not be said for the Hyper Cub’s set which were sadly beyond repair. 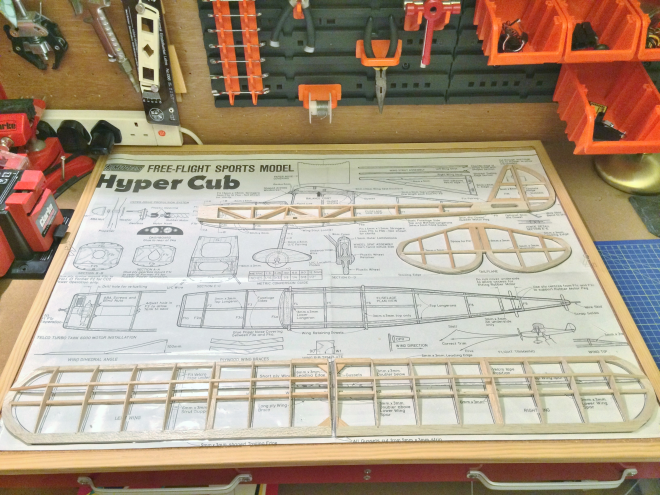 The Hyper Cub’s fuselage sides are constructed in the traditional manner of one stacked upon the other. 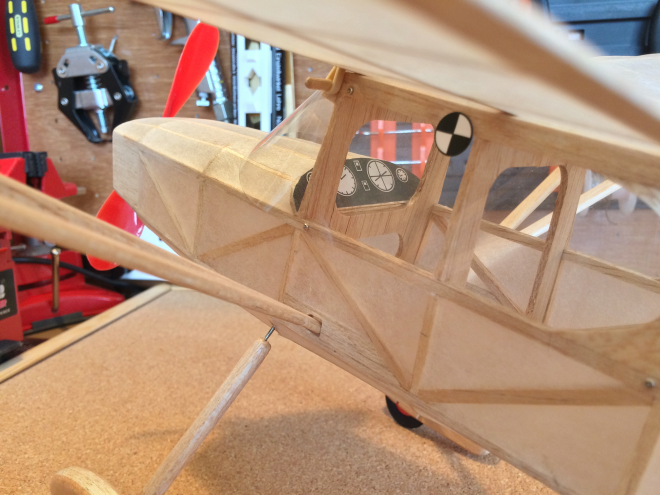 Wing struts, wheel fairings, small diameter propeller and a simple dash are all included in the kit and really aid in bringing the model to life.

Lastly, some images just stick within the mind.  The advertisement picture of ‘the’ shed below is often brought up in conversation when discussing vintage kits. More often than not who made it cannot be recollected, but I can’t help but feel many still secretly organise their own hobby bench with this image lurking back there somewhere in the recesses of the mind.

One thought on “‘That’ Modelling Shed Image (DPR Models)”