I elected to try Eze-Dope, by Deluxe Materials, instead of cellulose dope to affix and shrink the tissue.  Marketed as being water soluble it was certainly easier to clean up afterwards and considerably less smelly!  I found a weak solution worked better than water alone for initial tightening, followed by several coats at 50/50 until slightly glossy.  It was difficult to brush on a thin enough coat if applied neat straight from the bottle resulting in an uneven crazed surface.

My only other criticism is that once dried the tissue can be ‘stretched’ if enough pressure is applied to a small area, resulting in a slightly sagging panel.  I suspect this is the ‘polymer’ nature of Eze-dope, which once ‘dry’ then behaves as a plastic.  No amount of additional water or dope would encourage the tissue to re-shrink, and heat, whilst initially successful, still failed to provide a permanent solution.  The only option was to cut away the offending area and re-cover; not difficult but slightly annoying.   I’m hoping paint will maintain the surface tension somewhat but failing that it will just be a case of handle carefully!  On the flip side, slightly stretchy also equates to puncture resistance and the sagging wouldn’t be sufficient to affect flying performance. 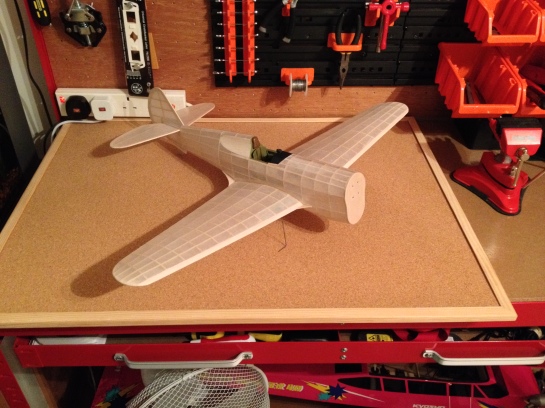 Assembled and ready for the plastic parts and wing fairings.

The kit supplied tissue was used throughout and (mainly) applied dry using Eze-Dope at the edges.

I’m still debating on using 1/32″ balsa instead of thin card for the fairings. IMO it’s considerably easier to sand and shape balsa a bit at a time than cut card.

The belly pan stringer detail was a little vague on the plans and required a bit of comparison with photos of the full size P40 and then a bit of guesswork. I reached for the white glue to encourage the tissue to stay attached to what amounts to a concave structure during application.