This picture makes me look gargantuan! (the reality is I’m the size of a lunch box 😉

The diminutive yet indomitable Honda EX350 portable generator was introduced in 1987 and was the second-generation domestic generator from Honda.  Notably it was the world’s first to introduce an inverter circuit. This was achieved though some wonderful engine miniaturisation to turn a three-phase multi-pole (15 poles AC and 6 poles DC) high-speed stator which, via an intermediate DC regulator/rectifier was then reconverted back to mains voltage AC current through a simple invertor.  All standard stuff these days but novel at the time. The sine wave was a simple 50 Hz modified-square, but the important point was that it was stable.

The domestic generator market was aimed at those who wanted to power ‘in the field’ the likes of small radios, stoves and lighting at campsites, festivals etc.  Nearly all electrical devices are designed to run on a stable pure-sine wave (mains) AC current and do not work well if the waveform is fluctuating.  Previous generators had a messy, fluxating waveform that led to erratic operation from plugged in electrical devices.  A simple, but stable modified-square wave was a big improvement and, at only 8.5 kg, the Honda EX350 was a hit with consumers and produced in considerable numbers.  In 1996 Honda introduced the EX500 which packed a little more punch and had a true sine waveform. The EX500 wasn’t produced for long before Honda released their (world first) microprocessor-controlled sine-wave inverter 4-stroke generators.

The EX350 outputs a Quasi Sine wave (sometimes called a modified square wave). A pure Sine wave first appeared with the later EX500 and then on all subsequent Honda generators. While the quasi wave of the little EX350 was a compromise, it was stable and a significant improvement on previous generations.

By using multiple components integral to the crankcase and on a single axis, Honda were able to keep the EX350 very compact

To keep the EX350 light, Honda used a 35 cc 2-stroke with everything running through a unique crankshaft design on a single axis.  The pull starter mechanism was integral to the top crankcase and the stator doubled up as the flywheel.  The little EX series were the only 2-stroke generators Honda ever produced and, as this type of engine just cannot meet modern emission laws, are likely to remain as unique examples. While most mains devices and power tools from several decades ago were rated at less than 300 Watts, they are considerably higher now and beyond the ability of the EX350.  Even if the rated wattage is low enough, they likely require the high energy peak of the sine wave which is absent on a modified-square wave. Finally, for short length excursions, lithium power packs have made the need to run portable devices from an internal combustion generator a thing of the past.  Still, the high level of engineering inside is fascinating and for that reason alone I have one myself (oh and it’s red; my favourite colour!). 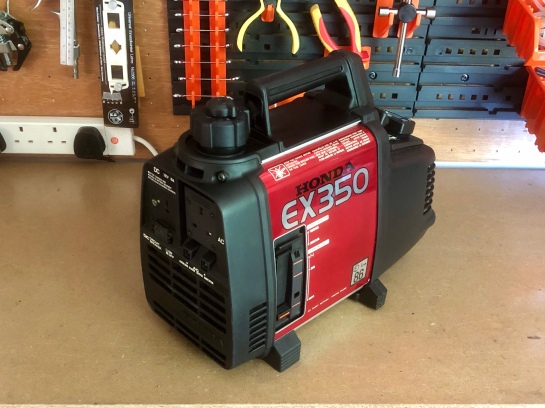 Ive added a small LCD hour counter (tacho) and RPM monitor at the rear.  This has an input cable that is wrapped several times around the spark plug HT lead to count the ignition pulses.  Takes the guess work out of setting the engine’s rpm follow a carburettor rebuild.

Beautifully engineered with everything neatly tucked away.

Like most things Honda, the EX350 is pretty bullet proof and will keep going for years with minimal issues.  Indeed, I would hazard a guess that most chug away with the bare minimum, if any maintenance.  That said, the 2 stroke engines in the EX350 were initially marketed as requiring a 50:1 oil mix; likely to guarantee sufficient lubrication in cases of slap-dash oil mixing and reduce returned units.  This really was too much oil and caused a build-up of carbon within the exhaust manifold and silencer.  If left unchecked this would begin to restrict exhaust flow and at worst, carbon granules could detach and be drawn back into the engine to score the piston/liner.  Scoring wouldn’t kill the engine but would slowly chip away at engine efficiency and peak power output. Repair at this point would be uneconomical. Honda later amended the ratio to 100:1 (1% oil) which made things much cleaner all round but many are still likely run on 50:1.  Either way the fix was simple;  remove only a few bolts to periodically remove and clean the manifold of carbon build-up.  My own EX350 has also been treated to a carburettor strip down, new air filter, spark plug, fuel lines and a good clean inside and out.

The result of using oil at a ratio of 50:1. Carbon deposits soon build up in the exhaust manifold and can harm the engine if not removed.  Use 100:1 as per Honda’s later amended instructions.

Cleaned up – and yes it’s the same engine. This is the result of a little gentle scrubbing and then subsequent use of Shell V-Power 99 Octane and Stihl HP Super synthetic oil at a ratio of 100:1 (both of which contain cleaning additives)

The main (shown here) and pilot jets within the carburettor quickly get blocked if old or poor quality fuel is left to sit for a long period of time. This will cause a lean mixture (not enough fuel and too much heat) and rpm surging. A quick blast with compressed air will unclog allowing light to be seen through the jet. 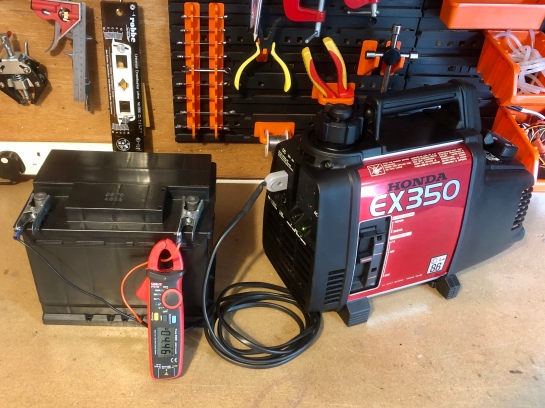 While some modern mains powered battery chargers might stuggle with the quasi-sine wave, the EX350’s own 12v DC output is perfectly capable of charging a car/caravan battery on it’s own. It is rated at 6 amps and is ideal for top-ups. It’s not a float charging circuit and the generator will essentialy strive to put out a flat 6 amps at all times. Overcharging won’t be appreciated by the battery so you will need a multimeter or similar to monitor the batteries level of charge.  Here my EX350 is putting out just shy of 4.5 amps into this car battery. It’s an old battery (hence why it’s no longer in my car) and likely has an elevated internal resistance so I cannot blame the little generator from stuggling.